What You Will Learn

In this tutorial you will use RF.Spice's black-box virtual blocks to model a Quadrature Amplitude Modulation (QAM) communication system and construct a pair of transmitter and receiver circuits. Then you will use a long lossy transmission line as the channel to connect the transmitter and receiver circuits. You will simulate the transmission of a binary data packet through this communication link.

Overview of the COMM System Architecture

Quadrature Amplitude Modulation (QAM) is a digital modulation scheme that is similar in nature to the analog AM. A binary data sequence is converted to a pulse train that serves as the baseband signal of the communications system. The baseband signal is split into two equal parts and the two parts are mixed with synchronous cosine and sine versions of the carrier frequency fc. The up-converted signals are then summed together with opposite signs and the resulting QAM signal is sent to the channel. The figure below shows the basic simplified architecture of the QAM communications system. There can be additional blocks including gain stages and signal shaping filters, which have been omitted here for the sake of simplicity.

On the receiver side, the received QAM signal from the channel is split into two equal parts and the two parts are mixed with synchronous cosine and sine versions of the carrier frequency fc. The down-converted signals are then summed together with opposite signs and the resulting signal goes through a peak detector. The output analog signal then passes through a comparator to recover the transmitted binary sequence.

Building and Testing the Modulator Circuit

To generate a binary sequence for this project, , you will use a "Digital Source" followed by a DAC conversion bridge. The data rate will be 1GHz or 1G sample/s. In other words, we assume a clock rate of 1GHz with a period of 1ns and a pulse with of 500ps, The input binary sequence is: 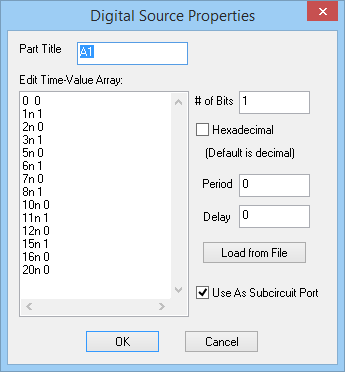 The property dialog of the digital source.

The digital source device itself doesn't have an explicit clock input. You set the timing through its Time-Value Array table as shown in the table below:

Place and connect all the parts as shown in the figure. The DAC conversion bridge generates a pulse train of binary voltage levels 0V and +5V based on the input bit sequence. For the QAM modulator, you will use a 3GHz carrier frequency with a carrier amplitude of 5V. For the signal splitter, you will use the Wilkinson power divider you explored earlier in RF Tutorial Lesson 12. Set the center frequency of the Wilkinson power divider to fc = 3GHz and set its power ratio to K =1 for equal split between the two output ports.

Run a Transient Test of your modulator circuit with the following parameters:

The results are shown in the figure below. Note that a very small time step ceiling make result in long computation time. Here we have chosen a Step Ceiling of 10ps to speed up the simulation.

Building and Testing the Demodulator Circuit

In this part of the tutorial lesson, you will build a QAM demodulator circuit. To test your demodulator circuit, you will initially use an AM-modulated voltage source for the input signal. This source is accessible from Menu > Parts > Waveform Generation Blocks > Modulated Waveforms > Single-Tone AM Modulated Source. It represents a sinusoidal baseband signal of frequency fs modulated on a carrier frequency of fc. The AM waveform can be expressed as:

Place and connect all the parts as shown in the figure below. For the receiver circuit, instead of a Wilkinson power divider, you will use a simpler resistive power divider. Set the lengths of the input and output feed lines to a minimum: len_in = len_out = 2mm. For this part, you will use the "Limiter Block" simply as an amplifier with a gain of 5. For the peak detector block of the receiver circuit, you will use a full-wave bridge rectifier together with a simple RC filter. The analog binary output of this circuit fluctuates between low and high voltage levels. Finally, the Ideal Comparator Block compares the output of the peak detector circuit to a fixed DC voltage of +4V. Set the gain of the comparator to 10. This may also serve as an IF or baseband amplifier. The output of the comparator is converted to a digital output using s ADC bridge.

Run a Transient Test of your modulator circuit with the following parameters:

The results are shown in the figure below. As you can see from the figure, the voltage signal v(7) at the output of the peak detector (plotted in dark blue) is a good reconstructed replica of the baseband 300MHz sinusoidal signal. Compare this signal to the envelope of the input AM-modulated signal plotted in yellow. You can use the "Delta Line Mode" of the graph window to measure the period or clock rate of the binary output, which is about 3.34ns consistent with the signal frequency of fs = 300MHz.

Putting the Transmitter and Receiver Together With the Channel

In this part of the tutorial lesson, you will put the QAM modulator and demodulator circuits of the previous parts together with a channel to simulate a communication link. In a wireless system, the channel is the free space between the transmit and receive antennas. One way of modeling the free-space channel in RF.Spice A/D is to use a dependent voltage source at the input of the receiver that is driven by the voltage at the output of the transmitter. The proportionality constant can be set to a very small number representing the free-space path loss. For this project, however, you will use a wired channel or cable represented by a lossy transmission line segment. In that case, the receiver can be directly connected to the output port of the T-Line segment. You will use a TEM line with Z0 = 50Ω, eeff = 1 and alpha = 0.5dB/m. At a length of 10m, the total single attenuation due to the channel will be 5dB.

You are now ready to put it all together. This time you will send the QAM-modulated output of the transmitter circuit you built earlier through the transmission line channel and will feed it as the input of your receiver circuit. This signal will replace the AM-modulated voltage source you used in the previous section to feed your QAM demodulator circuit. For this part of the project, you will place an Ideal Buffer Block for isolation between the transmission line and the rest of the receiver circuit. The Limiter Block will both amplify and clip the signal from the top and bottom. Set the gain to 5 and set the lower and upper limits of the output voltage to -1V and +1V, respectively. Also define a gain of 5 for the Ideal Full-Wave Rectifier Block.

Place and connect all the parts as shown in the figure below. Note that the part values of the peak detector's lowpass filter have changed from the previous part. Also, the reference voltage of the Ideal Comparator Block has been decreased to 2V.

As the transmitted signal propagates through the transmission line, besides phase change or time delay, it also gets attenuated by 5dB over its whole length. The QAM-modulated signal signal arrives at the input of the receiver after a time delay equal to:

To plan your Transient Test, keep in mind that the input binary sequence has a total duration of 20ns, of which the last 4ns are zeros (silent). In addition, the channel causes a time delay of 33.3ns. So choose the following parameters to run a Transient Test of your QAM data communications link:

The results are shown in the figure below. The plots in light and dark blue represent the voltage signals at the input and output of the long lossy transmission line. As you can from the figure, the demodulated signal at the digital output represents a fairly good replica of the input binary sequence.

Back to RF.Spice A/D Tutorial Gateway