Building and Testing an SR Latch 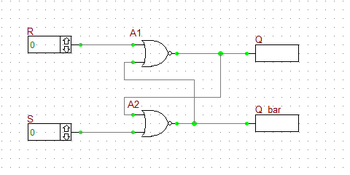 Two AND Gates (keyboard shortcut: A) 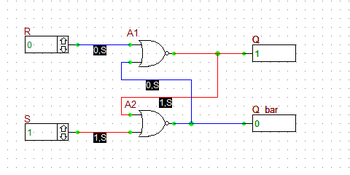 First, build the basic SR latch using two cross-coupled NOR gates as shown in the above figure. Before starting the simulation, manually set the inputs as S = 1 and R = 0. This is the "SET" state of the latch. Run a live digital simulation by manual stepping. Click the "Step"

button of the Main Toolbar or simply use the keyboard shortcut "Ctrl+H". Note that the Q output changes to 1, while its complement Q_bar changes to 0. Change S to 0. Now, you have S = R = 0. This is the "HOLD" state. Step the simulation, and you will note that the output do not change at this state. Now change R to 1, while S is still at 0. This is the "RESET" state of the latch. Step the simulation and you will see that Q changes to 0 and Q_bar turns 1.

The truth table of the basic NOR SR latch is given below: 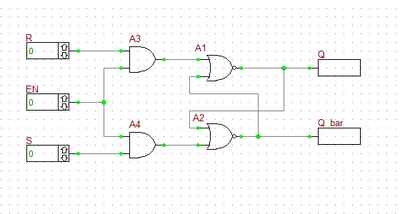 Next, you will add an "Enable" input to your SR latch using two AND gates as shown in the opposite figure. The EN input is fed into both AND gates. Therefore, as long as EN =0, the output of both AND gates is 0. This leads to S = R = 0, which represents the Hold state of the basic NOR SR latch. Before you start the simulation, set EN = 0. Then, set S = 1 and R = 0. Start a live digital simulation by manual stepping. Unlike the previous case, the output Q and Q_bar do not change this time. Next, set EN = 1. step the simulation and you will see that outputs change to Q = 1 and Q_bar = 0 (Set state). While EN = 1, change to S = 0 and R = 1. Step through and the gated latch enters its Reset sate with Q = 0 and Q_bar = 1.

The truth table of the gated NOR SR latch is given below:

Next, you will remove the two NOR and two AND gates from you digital circuit and replace the four gates with an SR latch device. Connect the input S and R pins and output Q and Q_bar outputs pins of the device as shown in the figure below. Note that unlike the previous circuit, here the top and bottom inputs are called S and R, respectively. Repeat the same procedure in the last part and change the values of the three inputs S, R, and EN in the same manner. You should be able to reproduce the above truth table for this circuit, too.

Back to RF.Spice A/D Tutorial Gateway